Posted on September 1, 2013 by Stanley Fefferman 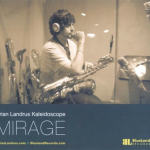 Low reed specialist Brian Landrus made this chamber jazz album by bringing a string quartet into his quintet Kaleidoscope. He calls it, Mirage, and I say “quite rightly,” because the changes fade like coral over a sunken sub into “something rich and strange.”

“Arrival” is spacey, searching for a groove, like wildlife tuning on a Patagonian rock, Landrus’ bari sax among them like a walrus wailing. Nir Felder’s guitar finds a flattened melody, sax chimes in behind, Mark Feldman’s violin fiddles and squawks, Kaleidoscope ensemble takes a chorus, two lugubrious strings (Joyce Hammaman and Judith Insell) sing along, and after some pizzicato bass by Lonnie Plaxico, sax leads the way out. All this under the baton of Ryan Truesdale.

“Sammy” brings an energetic big band sound with percussion beat laid down hard but nice by Rudy Royston. A strong sax groove takes mercurial guitar and keyboard crystals into the mix. Lonnie Plaxico opens “Don’t Close Your Eyes” as a bold bass conversation with Fender Rhodes, keeping a mellow tone with simple changes and a touch of the blues. The cut ends low as Landrus duets with himself (bass clarinet and bari) building a bulge of three low voices including electric bass.

“A New Day” blends Jody Redhage’s imploring cello playing harmonies in octaves with the Rhodes. Plaxico follows with an amazing pizzicato solo on “The Thousands,” and by “Someday,” halfway through the album, the groove maintains the mellow, is harmonious, without dissonance or harshness, but with lots of extra colours. “Reach” is unique, the burbling, garbling, gentle giant noises of Landrus’ contra alto clarinet solo, that with the title track duet between bari and guitar creates a mood to make all your muscles go slack. And if you think you’ve hear all he has to say, “I’ve Been Told,” lays down a gentle Reggae beat behind a klez melody on yes, clarinet. The wheels of this lovely album touch down while Landrus plays a bass sax soliloquy called “Kismet,” a tune,“to keep a drowsy emperor awake.”