Posted on August 3, 2013 by Stanley Fefferman 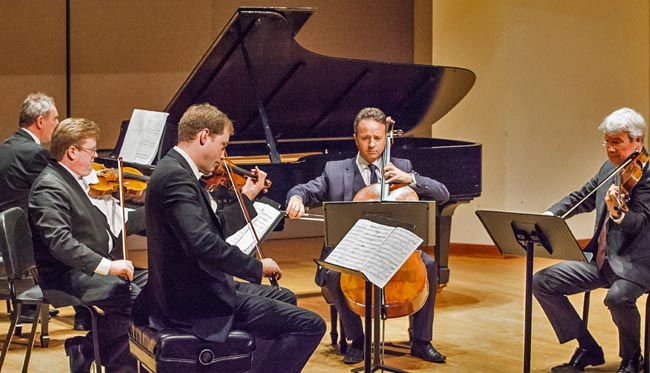 The Toronto Summer Music Festival’s emphasis on French Music of La Belle Époque brought something into focus about the music of Debussy: The Music is The Message.

The Sonata for Flute, Viola and Harp, L. 137 opens with a movement marked Pastorale. Jennifer Swartz released Debussy’s first musical cell from her harp, the flute of Leslie Newman extended it, and after a pause, Steven Dann added the viola’s dusky timbre, making a musical texture, that throughout the variations, even during rare passages of imitation, had clear musical lines, in which the voices were distinct, the textures lean and light.

The mood of the first movement seemed wistful if not sweetly melancholy. Its flow was like clouds moving over sunlit water on which little fish jump for flies skimming between lily-pads where frogs sit on folded thighs. The second movement was paced more quickly, passing like an idle dance stirred to urgency by a rapid train of thoughts that bubble up, scintillate, and vanish. The Finale is a passionate return to the starting cell. The viola’s pizzicati pulsed ‘tick-tock’ like a timer counting down that impelled the fugitive flights and oscillations of flute and harp. There was no climactic release at the end, just a sense of debris blowing in the wind.

Of this ending Debussy wrote: “I can’t say whether I should laugh or cry…Perhaps both. Both adds up to fullness, and the audience was full of appreciation.

TSMF Artistic Director Douglas McNabney introduced André Caplet’s Conte fantastique for Harp and String Quartet (1908) as a hidden gem of La Belle Époque. It is true that Caplet orchestrated for Debussy and wrote his own advanced and novel music that has been overlooked. Caplet’s musical treatment of Edgar Allen Poe’s macabre story “The Masque of the Red Death,” got a royal showcasing with a quartet made up of violinists Martin Beaver and Jonathan Crow, respectively the Tokyo Quartet’s first violin and the TSO’s concertmaster; the French cellist Marc Coppey, and on viola, Steven Dann who has been principal viola in Toronto, Vancouver, Zurich and Amsterdam. 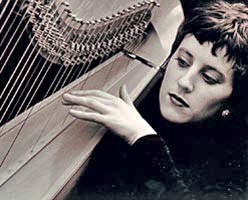 This stellar quartet clustered around the harp of Jennifer Swartz gave Caplet’s thickly textured, highly atmospheric, boldly spooky Conte as good an account as could be expected. I particularly appreciated the dissonant images of disintegration rumbling up from the cello’s depth mingling with the alarmed voices of violins and the rippling anxiety of the harp. But not “All the king’s horses” etc. Could raise this lurid melodrama to the level of discourse we enjoyed with Debussy or the Brahms that followed.

Brahms brought the evening back to clarity, the thrill of tight writing, and in the end, real fire. His Piano Quartet No. 1 in G minor (1861). opens with a four-note motive stated by the unison strings that becomes the basic building block of the entire Quartet. Brahms was the first to play the piano part in public. This night, Nash Ensemble’s Ian Brown made the keys move like a fresh breeze among sweet tensions of the strings. The Intermezzo that follows is both serious and cheerful, weighty and lyrical, always swimming in musical interest, melodic like Schubert and like him at times a bit repetitive. The Andante began with dark, flowing lines of a rhapsodic melody that piano marched into a grand, patriotic anthem. The motto slowed to a wandering tempo, the feeling somewhat forsaken, until the strings, notably Martin Beaver, brought back passion, vivid and clear.

The Finale, Rondo alla Zingarese: Presto, in other words fast and flashy Gypsy fiddling backed by Brown’s inspiring barrelhouse piano, maintained unity with the main motto that also appears to have kept this pick-up ensemble playing in perfect unity. It was schmaltz to the max, but it seemed like the best, happiest, stand-alone movement in all of Brahms.