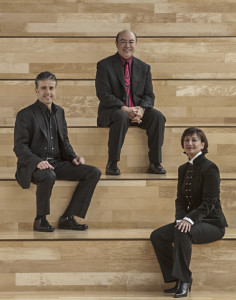 Triple A rating for Toronto Summer Music Festival’s third Mainstage concert at Koerner Hall last evening. The Gryphon Trio earned the first A for their attunement to each other in timing and friendly rapport. From the opening piano figure, Jamie Parker matched the sparkling sensitivity of Debussy’s Trio in G major, Roman Borys drew out its richness with his cello, and ‘inviting’ is the word for Annalee Patipatanikoon’s way of playing her violin.

It is almost unprecedented that all three selections in a program should please this reviewer, but a second A goes to the Mussorgsky and the Fauré that followed Debussy, each succeeding to offer the ear a unique and distinct pleasure. Guests Robert Pomakov and Paul Colleti made it an AAA; Pomakov for the sheer power and drama of his bass performance in Russian of Songs and Dances of Death (arranged by Gary Kulesha); Colleti for synching his viola warmly with the Gryphon players in ensemble and in the many vibrant solo passages for viola that Fauré planted in his Piano Quartet No.2 in G Minor, Op. 45.

The audience was well enough trained to withhold their applause after the Debussy first movement that thrilled with many variations of it’s lovely faery-tale motif. However, after the second’s virtuoso pizzicato opening and the fanciful garland of arcadian dance melodies that followed, the whole room breathed a sound, part sigh and part grunt, to signify its pleasure. 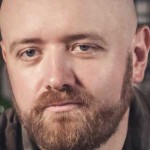 Mussorgsky, himself dying of despair and alcoholism, composed a four-song-cyle in which Death appears singing a lullaby to a mother and her dying child, as a gallant lover to sick woman, as sister of mercy to a peasant freezing in the snow, and as female commander to dying soldiers on a battle field. Not in any way does this promise pleasure on a summer night. But Robert Pomakov brought on the majesty, the pathos, the passion and the drama of these situations, silencing any ideas of other preference one might have. 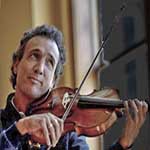 From that magnificence, after intermission, the concert resumed with the full-throated lyrical surging of Fauré’s sparkling Piano Quartet. By turns delicate, rhapsodic, evanescent and knees-up riotous, the piece and the performance created a deep happiness visible in the players and certainly felt in the audience that encircled them. It was a peformance unmatched by any recording that I know of.