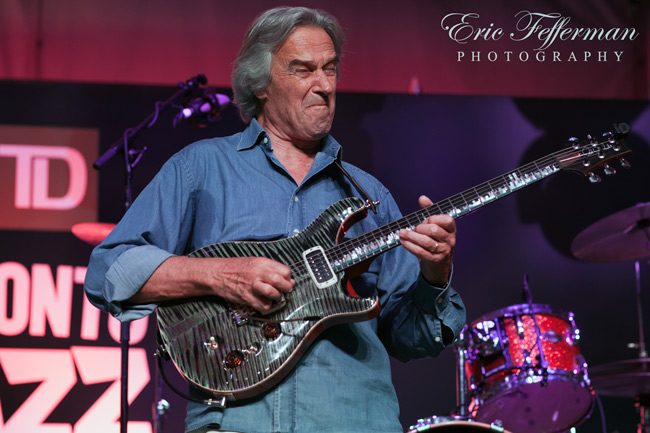 British guitar icon John McLaughlin in his seventies but not showing it brought the newest version of his band The Fourth Dimension to the TD Toronto Jazz stage last night for a huge affirmation of electric fusion and the fans who favoured it with ovation after standing ovation.

McLaughlin, modest about himself, was effervescent in affirmating his eclectic band—from India Ranjit Barot who made his drums talk, Cameroon-born bass guitarist Etienne M’Bappe, and from the UK, multi-instrumentalist and original Fourth Dimension guy Gary Husband, simultaneously on piano and keyboards and sometimes on drums. It was great to watch McLaughlin play to/with each of them and to feel the respect flavouring music that mercifully mixed mellow with hard-hitting  starting with “Guitar Love” from their latest album Now Hear This.

A highlight was the tune from the 2008 album High Point entitled “Abbaji (For Alla Rakha)”: the guys alternate singing the mantra “Love and Understanding” in call and response, McLaughlin showing he can maintain those blinding fast runs, and the band totally broke it up. There was the pleasant surprise of an all-too-short slow blues, followed by a too-fast-for-my-comfort take from the ’92 album Hijacked, redeemed by a McLaughlin guitar solo with a timbre like a big band horn section, and a virtuosic bass solo by M’Bappe. This one just brought the audience to its feet.

The spiritual thread of McLaughlin, braided for so many years by Indian Music with Mahavishnu ran through the whole show, notably in the slightly banal gospellish “The Creator Has A Master Plan”, and culminating with a tribute to Coltrane’s “A Love Supreme”. 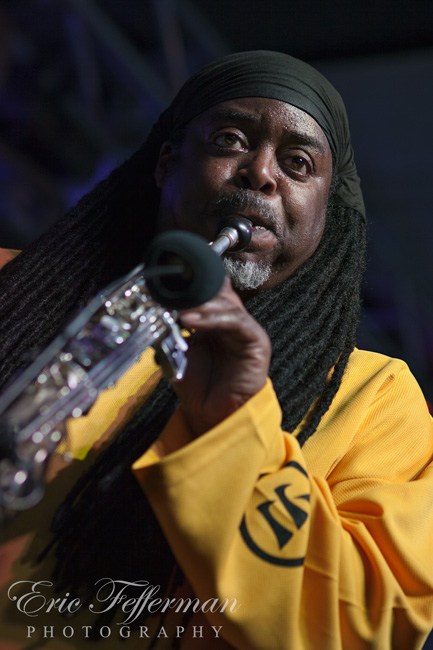 There was also a touch and more than a touch of gospel verging on musico-religious demagoguery in the hour-long set Britain’s Courtney Pine opened the evening with. Pine thoroughly engages the audience. First he unleashes an ostinato whirlwind from his amplified soprano sax, coming out of mantra into lyric and totally trashing melody with vinegary discords. Then he spends quite a bit of time finding out how we’re feeling and how much we like Toronto and so on, later getting everyone, and he means everyone, to clap their hands, then stand up to clap their hands and make what he calls flavouring music with spice (Scotch Bonnet and that line of palatal fireworks).

Pine’s lineup included Robert Fordjour – drums, Cameron Pierre – guitar, Vidal Montgomery – bass, Samuel Dubois – steel pan. Most of the tunes are from the latest album which Pine was not shy to push. House of Legends, exploring Pine’s Caribbean heritage, is a mix of calypso, reggae, ska, blended with swinging rock back-beats. Occasionally you would pick up a melody, like “Pop Goes the Weasel,” “Smile (though your heart is breaking),” “Crazy,” “Mack the Knife,” and “C’est What?’ But, as a rule, once they played a tune slow enough for you to get it, Pine would accelerate it a few G’s till it was bent out of shape like Schwartznegger’s face when he hit the vaccuum atmosphere on Mars in Total Recall.

Everyone soloed faster than a speeding bullet, none more tastefully than guitarist Cameron Pierre. Pine has a PhD in music and teaches at Westminister University, so there’s probably a good reason why his music sounds like noise animated by the complex rhythmic pulses running through it. I might catch up with him next time.