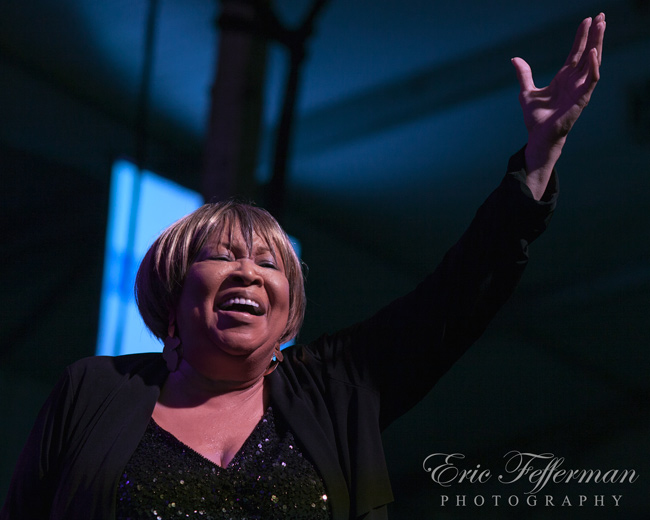 Day 2 of the TD Toronto Jazz Festival brought heat and humidity that reminded us summer has arrived.  It was sticky heat that keeps us indoors with the air conditioner blasting, but it was not enough to deter over 1200 fans of Mavis Staples & Dr. John from getting their souls fed by these music legends.

The chairs were lined up right to the front of the stage, meaning No Dancing here tonight, just an evening of worship at the altar of Mavis Staples.  Before she sang a note, the crowd was on their feet in sheer appreciation that she had graced us with her presence.  Two burly stagehands helped the 73-year-old singer on stage, and she seemed in genuine pain as she limped to the microphone aided by a cane. She tells us, “The Devil’s always busy. He tried his best to keep us from gettin’ here; messin’ with my knee. No, he can’t stop me!” Once Mavis Staples is at the mic, there is no question of who is in charge of the night. She at once takes control of the band and brings the audience into her inner circle, at one point calling us all her “cousins from Toronto.”

It has been 63 years since the Staple Singers began their career and Mavis’ performance is peppered with reminiscences of “Pops” Staples and their time on the road with Martin Luther King.  She tells the crowd that “Freedom’s Highway” was written by “Pops” for the “big march from Selma to Montgomery.” It is hard not to be transported by the music and under this tent in front of Toronto’s controversy-ridden city hall, it feels a lot like a religious revival mixed with a pep rally for a protest.  The tune ends with Mavis repeating the line “I won’t turn around” again and again, and there’s a quiver in her strong voice.  She preaches, “I just refuse to turn around. I have come too far y’all and I’m determined to go all the way. I’m still on that highway y’all, and I will be there until Dr. King’s dream has been realized.”  And this largely white middle-to- upper-class Canadian crowd was ready to march along with her.

Throughout the show Mavis honoured the greats who are “singin’ with the heavenly choir now” along with “Pops”: Muddy Waters, Otis Redding, Mahalia Jackson and the recently departed Levon Helm. From the first notes of “The Weight” even the youngest in the audience were singing, clapping and swaying to the music.  When she sang “Let’s Do It Again” there was not a person in the room who needed further convincing.  Imminent knee-replacement or not, this lady exudes a strong sensual vibe that brings anyone within earshot under her spell.

Not one to be stuck in the past, Mavis Staples is releasing a new album on June 25th. ‘One True Vine’ was produced by Jeff Tweedy of Wilco and recorded in his studio in Chicago.  Touring with the likes of Wilco and Neko Case and performing at festivals like Bonnaroo have helped bring the voice of Mavis Staples to a new generation and they were representing with fervour at last night’s show.Those who did not come to the show as worshippers, surely left with a new faith. 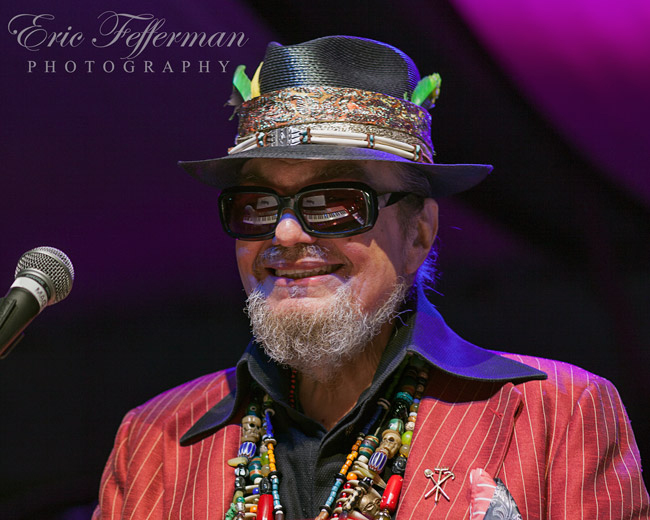 The second performance of the double bill was the equally legendary Dr. John from New Orleans.  A pair of skulls perched on the edge of his piano bring a little taste of N’Awlins to set the mood.  The audience greeted his arrival with a standing ovation and there was definite reluctance to sit down again.  Not until the encore did they get their wish when the remaining audience crowded the stage, dancing and waving white handkerchiefs as if they were second line dancers behind the band in a parade or funeral procession.

Those unfortunate enough to have chosen seats stage left could see no more that the top inch of Dr. John’s hat once he sat down at the piano.  By the halfway point of his two-hour set, the poor visibility seats had been mostly abandoned as patrons sought a better vantage point to watch the purple-suited Nite Tripper.

Maybe it was the contrast between the warm embrace of Mavis Staples and the cool vibe of Dr. John, but there was a very different feeling under the marquee after ten pm.  All that was missing was a smoky haze and a dirty martini as we left church and descended onto Bourbon Street.

While Dr. John was certainly the reason the audience came, the true leader on the stage was Ohio native Sarah Morrow, Musical Director, singer, percussionist and trombone aficionado.  Her black and grey striped stockings caught our attention when she first hit stage to introduce Dr. John, but it was her command of the stage, and of all the men on it, that kept our eyes on her for the rest of the show. She plays the trombone with her entire body and with each solo the crowd cheered a bit louder.

They may have both needed help getting on stage, but there is absolutely no question that the stage is precisely where Mavis Staples and Dr. John the Nite Tripper belong. We call them legends and their performances this night were indeed legendary.