The Oceanic Terrace of Philip Glass’s Cello Concerto No. 2. A review by Stanley Fefferman 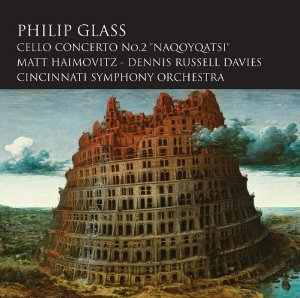 Philip Glass makes music that mostly sounds like Philip Glass. His motifs replicate identically, like stem cells that each possess within a tiny tendency to be unstable and to seek out variation. This is true of Glass’ large structures that move like ocean waves surging across vast distances. And it is also true of smaller structures, melodic motifs that sport and flow among and over the waves like whales, dolphins, schools of flying fish and flying Dutchmen steering phantom ships, in the case of this Cello Concerto No. 2, ships of war.

The 38-minute, seven-movement work is Glass’ recent rewrite for cellist Matt Haimowitz of his famous soundtrack for the Godfrey Reggio 2002 film subtitled Naqoyqatsi:Life as War. The concerto treatment free of film exploits the massive orchestral spaces as room for the most exquisite lyrical flights of Haimowitz’ solo virtuoso parts which include a couple of cadenzas that are awesome in their expressiveness. The recording with Dennis Russell Davies leading the Cinncinati Symphony is impeccable.

The structure of the whole and of each movement is a terraced soundscape. Opening with an outburst of percussion, a menacing solo cello motif drills through the ostinato orchestral pulse. The second theme, passionate and very lovely, is followed by propulsive clanging orchestral tutti. The first theme is taken up again, but this time weirdly by what sounds like the quavering of an ondes martenot, and the movement closes deep in the throat of the cello’s growl.

The second movement is all emotion, very intense, sounding a lot like the doom-ridden Tchaikovsky’s 5th. The third movement is a cadenza over a percussive growl; the fourth makes a rhythmically menacing nod to “The New World,” accented with the Spanish colours of trumpet and castanets. The fifth has the extenuated voice of the cello floating over a ghostly pizzicato. The sixth movement, entitled “Point Blank” begins with an abrasive cello moving along with crashing orchestral waves. Glass unfolds his motif in successive renderings of strings, winds, brass and percussion that builds a huge sonic wave. The most touching moment of the work is when this wave collapses into the soloists’ part. Then we understand that the cello is a personal voice, almost but not quite dissenting from the bellicose orchestral whole. The cello’s lyricism becomes a plea for the individual personality amidst gigantic corporate structures, a supplication for the human caught in the machine.

The finale is a Bach-like suite for solo cello that makes vivid the unknown. Beautiful and tenderly played from the heart, the cello seems to enter into choral union with the orchestra blending its voice in a sound that is not clearly either bowed or blown, not exactly modern, but more like Mahler with a Jewish lilt, that expires softly as a belltone.