Piano Ecstasy is an exciting title. Soundstream’s Artistic Director, Lawrence Cherney, put together a program of compositions with back-stories that promise to match the title’s excitement. Sometimes they did.

On the glittering stage of Koerner Hall were six gleaming grand pianos arranged in three  Yin/Yang clusters. Among the best-known of the six pianists were Serouj Kradjian (this year’s Juno-winning pianist of the Amici Ensemble), James Parker (three times Juno- winning pianist of the Gryphon Trio), and Christina Petrowska Quilico (the much recorded leading interpreter of Canadian New Music for the piano). 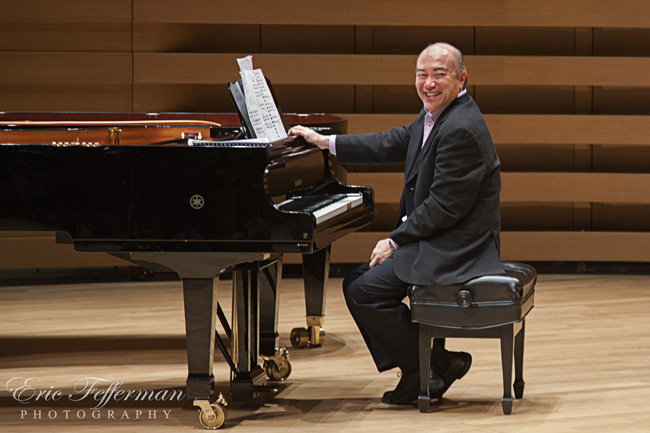 The opening number was John Cage’s delightful,The Beatles 1962-1970. Cage cut and pasted snippets from a piano score of Beatles tunes, arranged them at random, and freed the six players to layer the tempi and repetition of their parts at will. The resulting cacophony was a light-fingered and light-hearted ‘Name that Tune’. I didn’t catch what Jamie Parker started with, nor Gregory Ho’s answer, but Simon Docking’s riff  set off a fugitive memory, and I started to laugh. Flavours of “Norwegian Wood” came through a lot, flotsam of “Yesterday,” jetsam of “Maxwell’s Hammer,” and “The Fool on the Hill.” It was the ecstasy and the agony of memory reflected from “a bulging, swaying mirror of temporal inversions.”

I like the story that Shostakovich wrote his Concertino for Two Pianos, Op. 94 (1954) to play with his son Maxim. Parker and Petrowska Quilico delivered its brightly coloured singing lines with zest, alternating melodic treble and rumbling clef parts, tentative, then dancing into the manic, goofy, dissonant zone of Shostakovich’s signature “run as fast as you can, you can’t catch me I’m the ginger-bread man,” flights that also made me laugh.

Canadian ex-pat composer Colin McPhee (1900-1964) is said to have done the first western study of the Balinese gamelan music that inspired the Minimalist school of New Music. The best story about McPhee is that he recorded Balinese Ceremonial Music (available on YouTube) with another ex-pat pianist, Benjamin Britten. This evening, Simon Docking and Gregory Ho’s version was appropriately resonant, rhythmic, repetitive and easy to follow, but a rather too forceful, and lost the delicate character that gives gamelan its distinctive appeal.

Docking teamed up with Serouj Kradjian for Witold Lutoslawski’s Variations on a Theme by Paganini that brought the house down. Lutoslawski’s music is gutsy, sardonic tongue-in-cheek, written in 1941 to thumb its nose at the Nazi occupiers of Warsaw. The first movement is cool, dissonant, virtuosic, with the flavour of a Tom and Jerry cartoon fugitive piece that kept a mischeivous grin on the faces of both pianists, and got me to laugh out loud.

After intermission, jazz pianist Chris Donnelly joined Tania Gill and composer Glenn Buhr for the evening’s commission and World Premiere of 2 Pieces for 3 Pianos.  I usually get a kick out of Buhr’s music, especially his jazz, but this one was not for me. The three players worked the low ends of their keyboards to emit a black, smokey rumble that rose and crashed in wave after swelling wave. The second movement got some shape from 8-bar blues progressions and some colourful improvising by Donnelly that I liked the tunefulness of, but for me the piece was less hit more myth.

Steve Reich’s Six Pianos seemed to work the other way. Much has been written about the ‘phase relationships,’ ‘layering,’ and other compositional discoveries Reich worked out for his seminal Minimalist work. But the effect of it was sensational. I thought of a slogan Buddhist meditators who sit 13 hours a day came up with to justify  such obsessive practice. They say “You’ve got to be bored again.”

The sound of Six Pianos is like jungle drums that go on hour after hour. At first, interesting, then monotony develops into boredom, irritation, hypnosis-withdrawal, and then, lo! — out of the endless sonic oceanic swell, overtones begin to emerge like a dance of dolphins with angelic smiles, and you go with that.