Posted on April 8, 2013 by Stanley Fefferman 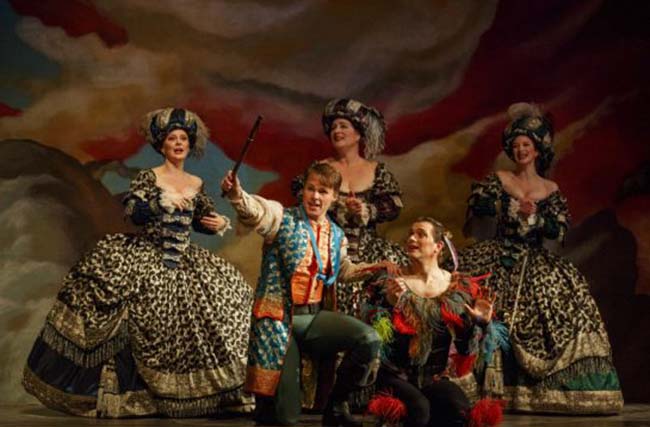 Opera Atelier is a brand I trust. I know The Magic Flute will not be produced as The Manga Flute, minus the Masonic element, with Prince Tamino as a Tokyo-based finance whiz and raccoons for the Three Spirits (West Edge Opera, Berkeley). Papageno will be dressed in tights and feathers, not like a punk rocker in an electric-teal leather jacket (Fort Lauderdale Opera).The setting not be in galaxy far, far away (Chicago Opera Theater); nor will the libretto, costumes and staging be reworked to represent Canada’s West Coast Musqueam culture including wolf and bear spirits against a video montage of Vancouver urban scenes collaged with First Nations totems. Opera Atelier’s idea of an ‘imaginative production’ is to imagine how to bring the audience of today into the opera that Mozart and Emanuel Schikaneder wrote and produced in 1791.

And that is what they accomplished, gloriously well. The very first bars of David Fallis conducting the Tafelmusik Baroque Orchestra invite you to relax into a soundworld that is ‘otherworldly’ because it is so authentically ‘classical.’ The tempo is stately with a lilt. The quiet period instruments draw you into an intimacy, breezily delicate in the strings, like birdsong in oboes and flutes, humourous in the bassoons, the timpani and basses inky-deep as a forest glade. The music fills you with Mozart’s signature good-natured vivacity, so when, behind the scrim, Set Designer Gerard Gauci’s 8 foot tall cutout-dragon chases Prince Pamino across a forest clearning, laughter just bubbles out of you. And when the Queen of Night’s three Ladies, turbaned and dressed like Dresden figurines by Martha Mann, dispell the dragon and vie for who will get exclusive hen-pecking rights to the unconscious prince, the audience just keeps laughing.

I imagine there are certain traditional elements the Co-artistic Directors, Marshall Pynkoski and Jeannette Lajeunessse-Zingg might not wish to carry forward: the opera’s mysogenism: “ A woman chatters much and does little”; Monostatos’ self-deprecation of his own dark skin; and the naive, servile, theism inculcated in autocratic Europe. Rather than cut or rewrite these elements, the directors overwhelm them with talent, not the least of it the total expressiveness of movement, posture, gesture and inflection that Pynkoski and Lajeunesse-Zingg demand from their company. Unity of direction animates every detail of this production, a unity approaching its 25th season. The only rewrite, and this surprise was a total delight, was the English libretto by Andrew Porter whose rhythms and rhyming couplets clicked right into the music.

Sets, costumes, lighting, stage management and choreography in this production provide a succession of delights that express theatre at its very best. Three girls (as The Three Spirits) paddling their airborne boat; the stately Queen of Night traversing the starry firmament in her silver chair; the priests and acolytes of Sarastro’s temple turbaned and robed in gold and blue resplendent as a Superbowl half-time show. But these spectacular elements are more than matched by the performances of the cast.

Ambur Braid is regal, and remote as Marie Antoinette in the role of Queen of The Night. Her voice thrills, and the stratospheric passagework that takes her into the region of high F is impeccable. It is expressiveness flowing through technical excellence that makes an audience happy. In that category, no cast member attains a higher level than Carla Huhtanen as First Lady and as Papagena. Her voice has gemlike clarity, her face sparkles in song or singspiel, and expressiveness flows to her fingertips. Olivier LaQuerre as Papageno is also delightfully expressive. His bass-baritone is smooth and lusty, his manner open-hearted, his comic cut-ups endearing. His pathetic moments are not always convincing, but his willingness to remain free is.

One floor down in “the tower of song” is handsome Colin Ainsworth, princely and charming, ardent and appealing: he sang with youthful clarity to make a credible if not compelling Tamino. His Pamina, costumed in the same cloth, is Laura Albino. Her singing was even, lustrous throughout her range and showing steady control of vibrato. As an actor she needs to let go more into the role. Joao Fernandes has a bass instrument and gravitas that fully occupy the commanding role of the High Priest, Sarastro. The deep resonance at the low end of his music is reassuringly steady. He might have been directed better as an authority figure to put out less Saturnine dignity and more Jovial warmth.

Curtis Sullivan as Speaker is an impressive stage presence and a dependable bass-baritone,though his energy is more monumental than flowing. Laura Pudwell, soprano, and mezzo Cassandra Warner sang well and clowned bitchy and real as the Queen’s Ladies. Aaron Ferguson, costumed and directed to play the villainous Monostatos as a thug who scuttles like a crab, pushed the pervasive knockabout comedy element down to the level of three-a-day-vaudeville, snarling and whinging in such harsh tones, you could hardly credit it when he actually sang.

Bonnie Beecher’s lighting worked hand in glove with Gauci’s set designs to create scenes that were theatrical in the hip fairytale way of Alice in Wonderland and The Wizard of Oz, where the adult mind and the heart of a child in us are equally at home, and where, if there is a lesson to be taught, it is conveyed through delight.