Posted on November 29, 2012 by Stanley Fefferman 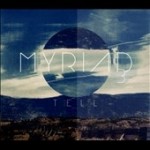 Threw this CD on the car stereo without looking at the personnel. First track gives the bass lots of space, transected by drums, but, say, that guy on piano is so tight and inventive—distinctive voice, sense of phrasing, laying down his chords in a kind of fractured time  his lines melodic and slightly dissonant in a tasteful way. Who could it be? Check it out—of course, Chris Donnelly, he of the multi-award-nominated 2009 debut album SOLO teamed in a truly collective trio. All the tunes except Ellington’s “C Jam Blues” are trio member originals, my favourites being Donnelly tunes that show his Monkish roots: “Fractured,” and “Mr. Awkward” a boogie/jazz tune that bops along between poles of “Epistrophy” and “Well You Needn’t.” Also Donnelly’s “For the Dreamers” which he opens tolling single notes and develops against repetitive chords in a new-agey hip-nagogic way that tumbles into Magical Mystery Tour chaos. “Drifters” is a bit on the (Moon River) commercial side, but shows the trio working well together as Cervino makes a tasty 3D network, Fortin’s bass pins down its nodal points and over them Donnelly embroiders a story. The closing number, Lament/PEX walks a sad slow bass line down empty piano steps and builds by incremental repetition an old-time ballad blending Bach with Leonard Cohen. TELL is my nomination for best Jazz album of the Year 2012.

Lorraine Klaussen has a strong, real voice with an excellent vibrato. Her tribute here to the classic songs and folk ballads of ‘Auntie’ Miriam Makeba is embellished with grunts, roars, squeaks, shrieks, and a whole arsenal of sounds that make her performance totally alive and virtuosic. Many of the songs are  more chant, call-and-response than story, but that doesn’t matter when you don’t get the african lyrics. What you do get is a kind of “hakuna mattata” positive attitude. One after another of the songs supported by colourfully textured percussion, excellent musicianship on guitar, and a wonderful beat, take over your body. Some of the English language ballads, Ms. Klaussen’s own compositions are a bit syrupy. Generally, there is lots of life and listening in this album. 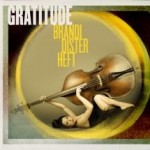 The opening riff of “Blues for Nelson Mandela”— brushes on snares framing a slow bass melody doubled on pian0—tells you this is Brandi Disterheft leading off her third album as a leader  with one of her own compositions . Brandi goes scratchy arco on the bass, leaves a gap for a high calibre authoritative blues chorus by Renée Rosnes on piano followed by Brandi driving a long, raw gut-bucket bass solo. The title tune starts with little repetitive melodic phrase in brass and winds featuring a New Orleans funereal trumpet solo by Sean Jones and a fine flute solo by Anne Drummond. Nobody in a hurry, sophisticated arrangement. Brandi sings the Burke and Van Heusen standard “But Beautiful, in a nice voice, good phrasing, less than perfect diction, a bit overdeliberate and breathy in delivery with more nice flute meandering in background. Brandi is a triple threat—instrumentalist, singer, composer, and more—producer. Generally, this album has blue tone, a few obligatory French language tunes, some complex polyphonic arrangements, and ends on an interesting, cool note with Brandi singing the Gene McDaniels jazz soul protest song “Compared to What.”  Mingus might be moved.  Keiran Overs (and Dave Young) might move over. This is a lush production. 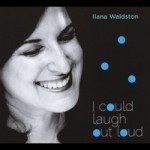 Ilana Waldron has a standup voice— clear, intelligent—and good diction. Her lower registers are of the textured Rosemary Clooney type, the mid and higher regs put me in mind of the Misty Miss June Christy. Warm, robust, big-girl voiced stylings, I could imagine Ms. Waldron on stage doing show-tunes. For her debut album Ilana’s into a classic 50’s sound (one tune references Vaughn Monroe–his bullfrog voice). Gutsy and good humoured, Illana offers the long, sophisticated intros originally written for each tune. Her band is solid, the arrangements by Mark Kieswetter (excellent on piano) are straight jazz, no pop. Nice to hear Ted Quinlan’s guitar on “You’d be So Nice to Come Home to”; Chase Sanborn on trumpet/flugelhorn adds value to many tunes, especially “Dancing on the Ceiling.” The hip set-list includes : “Down St. Thomas Way,” “Boum” (in formidable French), “Hannukah in Santa Monica” (Tom Lehrer, hilarious), and one you almost never hear, David Mann’s “No Moon At All” (covered by Ella, Anita, Doris, Julie, and Nat). Ilana Waldron enjoys singing and you feel it. I would have no problem listen to her for an hour in a high class lounge. 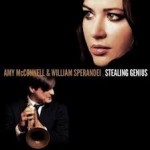 Amy McConnel brings a strong voice—breathy on one end, brassy on the other—to her torchy interpretations of a class setlist (Piaf, Elvis, Jimmy Page, George Harrison, Lionel Bart, Burt Bachrach). William Sperandei (trumpet-flugelhorn) blows solid jazz licks, blue and cool, that embellish Amy’s impressively controlled vocal lines in a Chet Baker kind of way. You start out feeling you can trust the begging-for-love emotion Amy puts out. After a few tunes, you begin to feel her colours are a bit too bright, her cooking a bit schmaltzy and overdone. There’s a commercial sameness in Mark Kieswatter’s arrangements and Douglas Romanow’s lush production that leads me into a suspicious mind. I don’t believe George Harrison’s guitar gently weeps, even though Rob Piltch is playing one. It’s the same drama in From “Russia with Love” and “The Look of Love”—both are over-produced rhythmically and emotionally, in the same way—to give off a big-money feel. Too bad, because there’s a lot of real talent here. A young lady gave me advice about listening to the Adele 21 album: take it a bit at a time. If you take Stealing Genius a bit at a time, you might have some very good times.

This entry was posted in CD Review and tagged Chase Sanborn, I COULD LAUGH OUT LOUD, Ilana Waldron, Mark Kieswetter, Ted Quinlan. Bookmark the permalink.