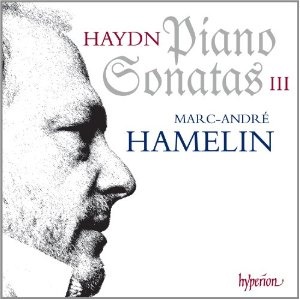 I have been listening to these discs a lot lately: on my sound system at home; on my car system; on my iPhone at the gym, taking the subway to yoga, walking by the lake. Hamelin’s Haydn goes with everything.

Sometimes I listen to Haydn, and sometimes I listen to Hamelin. Hamelin’s virtuosity and impeccable musicianship are palpable. You can easily hear how he feels about every note as he lays it down. But beyond his clear and thoughtful nuancing of the keys, there seems to arise from his playing of these particular sonatas a sense of high drama. It is as if the music were articulations of human voices, endowed with personality and mood, sharing the stage in a play by Chekhov, for example.

The delicacy, the wit, the deliberation and control of feeling that comes across from Haydn’s music through Hamelin reflects the intimacy of persons living in a particular society.  The sonatas from the 1760’s and 70’s are a major presence among the 11 works chosen for this album. They witness the elaborate galanterie of mid-century works written for young female students, as well as the ‘heightened sensibility’ of C.P.E Bach.

The G Major, No. 6 in four movements opens all trilly and frilly against a bouncy baseline and develops contrasting rapid staccato passages with delicately restrained scenes lightly-sketched in watercolours. The Menuetto that follows starts out skipping but falls down a baseline into lamentation. The Adagio’s reflective theme darkens into a querulous voice that in the Finale brightens and recalls the drive and dash the work started out with.

The B flat major, No.2 is distinguished by a five-star Largo in which Hamelin seems to bare his heart. The E minor, No. 4 opens with an Adagio that balances lyrical and rhetorical voices, then shifts up to Allegro carrying a similar tune with bell-like clarity but still somewhat plaintive in the style of troubadour making his case for love. The two-movement G minor, No.44 is an intimate cry fashioned with lapidary loveliness.

The renowned C minor Sonata, No. 20 appeared in 1780, and is among the first Haydn composed for a touch-sensitive instrument such as the new forte-piano rather than the harpsichord. The opening lament is operatic, alternating moods from plaintive to argumentative in textures simple and complex, suggesting soulful turbulence that Hamelin’s treatment reflects on and probes.

Hamelin’s final offering, the D major Sonata, No. 51, written during Haydn’s triumphant London visit in 1794, looks ahead to the budding Romantic sensibility that came to fruition in Beethoven and Schubert. The lovely, sonorous melody that opens this two-movement work, ripples gently along, balancing the flow from both hands. The concluding Scherzo bubbles forcefully with irregular chromatic colours and offbeat accents.

This album that spans many years of Haydn’s musical life is ‘Companionable’—a word I take from a poem by Yeats. The poet reflecting on his twenty-year appreciation of wild swans writes: “Unwearied still, lover by lover, /They paddle in the cold/ Companionable streams or climb the air….”

I can imagine more ‘unwearied’ hours of listening to Hamelin play these Haydn Sonatas.

This entry was posted in CD Review and tagged Haydn, Hyperion, Marc-André Hamelin. Bookmark the permalink.