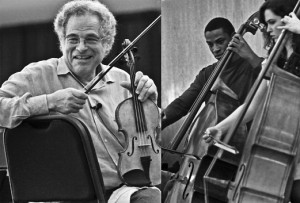 About this time of year, 225 years ago, when he composed the Viola Quintet in G Minor, K. 516, Mozart said in a letter that he often felt like dying, but that no one ever saw him crying. It is not immediately evident what Itzhak Perlman’s rationale was when he chose this piece to open this concert where he led his Music Program students.

The rationale for the other two pieces finding their way onto a program featuring young players seems easier to fathom. Dimitri Shostakovich composed his Prelude and Scherzo for String Octet, Op. 11 when he was 19, but you’d never know it. Felix Mendelssohn composed his String Octet in E-flat Major, Op. 20, when he was only 16, but you’d never know it either. Both have proven to be works of genius that have transcended their origins  and been accepted into the standard repertoire.

Itzhak led the Mozart and the Mendelssohn from the first violin’s chair, shepherding his students with cues and inspired playing through faultless performances. On the other hand, eight of his students took the Shostakovich on their own, and if they were somebody’s students, you’d never know it. In fact, typically, students like cellist Jia Kim and violinist Sean Lee are already well advanced on an international level in their professional careers, and have students of their own.

On the whole, the afternoon was a succession of delightful surprises, starting with the Mozart which started out with slippery emotional lines fragmenting as they fell downwards towards despair. But as the ensemble carried the work forward through the lyrical Adagio, the sheer pleasure of the players, most visible in Itzhak and Ms. Kim, began to overtake the heaviness, and the Allegro Finale surrenders to Mozart’s brimming lightheartedness.

There were moments during the first movement when the ensemble’s repeats of phrases initiated by the first violin seemed a bit mechanical, but that impression vanished quickly and never returned.

The Shostakovich, with Sean Lee in first chair soloing impressively, was a feast of dire states of mind curling through eerie, shrill dissonances that set your teeth deliciously on edge, till the Scherzo broke in with a wild dance and the ensemble galloped from crescendo to climax.

After intermission, it was the Mendelssohn Octet with Itzhak again in first chair leading the music from a Haydnesque call and response into a wide, rich, flowing river of music that sometimes subsides into the sad, deep breathing of cellos then ramps up swirling eddys of Beethovenian rhythms.

The Andante is a polyphonic elegy, more colourful than shapely. The Scherzo moves staccato but lightly, literally spritely like Shakepeare’s Ariel, only to be blown away by a musical joke. The Presto’s initial moves are oafish. It thunders and stamps its way into a frantic perpetual motion and closes, after a brilliant cadenza, in a long, slow, unbridled symphonic rush.

This musical afternoon that so moved from darkness to light brought the audience to its feet for three bows. Since there was no encore, I will be patient till I can hear more of Itzhak and his Perlman Music program in Toronto.