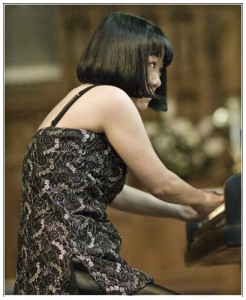 Yoko Hirota enjoys the freedom of  not letting her right hand know what her left hand is doing.

She shared her delight  by playing the opening bars of Sungods (2007) by Brian Current, her right hand going in 12/8 time, her left in 4/4. Ms. Hirota’s hands interwove the lyric sonorities of Current’s lines into a dense, lush, rhapsodic, tapestry.

Ms. Hirota demystified the structure of Bruce Mather’s Fantasy (1967) by demonstrating each of its four layers of counterpoint separately and together. She then played the work with great sensitivity to differences in register, dynamics and rhythm, giving us a dreamy, organic, watery piece of music notable for how the high notes skitter like water-flies over darker tones of long duration held till they come to rest. If Fantasy were a jazz tune, it might be “Misty,” or “Tenderly.”

Trinomes (2011), François Morel’s first piano work in nearly 50 years, written for Ms. Hirota, is an imaginative and persuasive work. It opens with gnarly grunts and shifting rhythms, evoking for me, as it develops, the tangled triplex backyard balconies of wintery Old Montreal crossed by clotheslines where billowing bedsheets freeze.

Robert Lemay, who is Morel’s student and Ms. Hirota’s partner, composed the four-part Hiroshima Mon Amour (1998) as an homage to the  1959 film. Lemay’s work builds on the resounding C of the peace bell tolling repeatedly as thuds of disaster fall from the sky onto scenes of panicky beings who scamper away from the doom wafting down in radioactive flutters. The closing tone is a weirdly ruinous hand-plucked harmonic on the peace bell C. This performance got a strong ovation.

Yoko Hirota gave Brian Cherney’s 14′ Nachtstüke: six miniatures for piano (2011) its world première. Each miniature is based on a spacey, mystical piece of literature, and is separated from the others by a repeated one-chord interlude that endures for 45 seconds. This is a high-minded work, inclining towards spirituality, though there is a portentous sameness to the first five pieces. The sixth, based on a passage from James Joyce’s story “The Dead,” stands out for its sensitive tentativeness and a peacefulness that was quite wonderful.

Laurie Radford’s Rolling (1997) is accompanied in the program by a piece of his own poetry that describes the work in phrases like: ” …slivers of energy/riding the gusts earthward,/ misshapen mirrors shattering with motor-like precision/into fragments of reflection….”

It builds from an ostinato ‘chopsticks’ rhythm, adding pitches to a staccato morse code message gradually rolling into chords that engage the richness of the entire keyboard. Towards the end, the work develops some imaginative black and white effects like the shadow of tree branches falling across the bars of light shining through metal fence railings.

Mr. Hirota is a Schoenberg specialist, and she opened her recital with Fünfe Klavierstucke (1923),  the set that ends with Schoenberg’s first, revolutionary, 12-note cell of serial music. The work is too well-known to need any comment on it here. However Yoko Hirota’s performance was quite magical.

As she began to develop the pitches of the slow opening melody into variations by moving them to different octaves and changing their shape and rhythm, I happened to glance over the audience and noticed the accordionist Joseph Macerollo. From that moment I began to hear the piano as if it were an accordion. I offer this anecdote as tribute to the special sensitivity of Ms. Hirota’s touch, and the sinuosity of her flow.